At 10.30 p.m. on 12 January 2016 Acting Sergeant Luke Warburton thought he was taking his last breath. A decorated New South Wales Police Officer, the father of three was looking death in the face after a bullet pierced his femoral vein. If it wasn’t for the fact that it happened in the Emergency Ward of Sydney’s Nepean Hospital, Warburton would probably have been dead already. An hour earlier, he’d walked to his police van with his ever-faithful German shepherd, Chuck, trotting alongside. 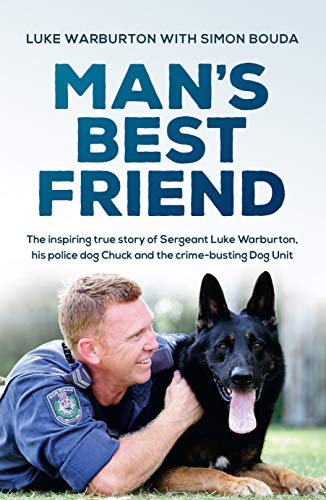 Later, Luke would be awarded the Commissioner’s Valour Award for conspicuous merit and exceptional bravery in the line of duty. He would maintain he was just a copper doing his job.

So, too, was Chuck, who was nationally recognised for bringing down Australia’s most wanted man, Macolm Naden, after a manhunt lasting more than seven years.

Man’s Best Friend is Luke and Chuck’s story. It’s the story of a boy who dreamed of one day being a policeman, of his love for dogs and his time at the NSW Police Dog Unit. It’s also the story of an ordinary man and his ordinary dog doing extraordinary things in the line of duty.